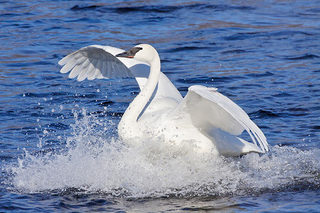 A Lake Superior Morning
in Roseville

There was a time when inspiration leaped at me. Surrounded me, surprised, and awed me. Those were Lake Superior Days. I wrote columns about them. I wrote a book about them. Then we moved.

Recently, I woke to find Lake Superior beckoning from our bedroom window in Roseville, where we now live. A band of heavy blue, spanning the horizon to the southwest with no end in sight as it had in Schroeder. The thrill was momentary of course, my rational brain denied the Lake's presence in south central Minnesota. It was a day of miracles, nonetheless.

A walk in Central Park that afternoon, revealed tiny blue violets carpeting the ground, reminding me of my daily walks on the Superior Hiking Trail, as I followed the birth of a spring landscape from flower to flower: Bloodroot, Dutchman's britches, and marsh marigolds as they pushed their way toward the sun. In Roseville where we now live, spring perennials do not appear in such abundance, but the violets adorn the trails. Miracles too.

During that same walk, I also witnessed what I had never seen on Lake Superior, the touchdown of seven magnificent Trumpeter Swans. With a raucous babble of loud bugles and horns, their arrival shattered the silence. Eight-foot wingspans battled for space, so heavy that they scooped rather than touched the lake as they landed. The first to find balance rocketed after others, necks stretched low and long like glorious white shafts of light.

I imagine that you, like I, have experienced a sense of lightening with the gradual lifting of Covid-19 restrictions. Leaving the apartment without donning my mask feels strange. A feeling of being exposed, the air fresh around my face, my expressions no longer limited to crinkled eyes – Covid's simulated smiles of greeting and pleasure. While others enjoy a greater sense of freedom, Bill and I find our lives more confined as his increased need for oxygen demands we limit our departures from the residence to less than two hours. Because his health is so at risk, we wear or carry masks wherever we go.

When I returned from my walk in Central Park, I settled down to read a bit, choosing books of poetry as I often do before writing. That day I selected Mary Oliver's work, loving the way she transforms the ordinary into the miraculous. Her poem "Poppies" in New and Selected Poems, reflected my experience. That light invites happiness, which is indeed, a ". . .kind of holiness, / palpable and redemptive."

May your lives be filled with light. May that happiness become the holiness that draws us closer to one another and may that union eventually transform this darkening world.